What a crazy month July was.  I found out my dad had to have the plaque removed from one of his carotid arteries and ended up staying with him a week.  I still had to work, so I packed up  a monitor, docking station, printer, etc. and drove to South Dakota, around 600 miles from where I live.  The surgery went fine, but in spending a week with him, I realized just how much he was declining, both physically and mentally.  After discussing this with my brother and doing some online research, we decided to ask my dad's medical doctor to perform a geriatric assessment.  We weren't sure if the changes could be attributed to normal aging, or is there is something else wrong, such as dementia.  This is scheduled for late September. In the meantime, I told my dad I was worried about him and that I felt he should no longer live in his house in the country, but needed to move into town, preferably to an independent living facility.  He was confused as to why I felt this and after explaining some of the behaviors I witnessed, agreed.  That was July 14.  Last week, he put a deposit down on an apartment at a nice facility and put his house on the market. His house sold in three days for full asking price and closes Aug. 28th.  It's been a whirlwind, but everything seems to be falling into place.  Unfortunately, my work load, along with the fact that my two sons head to college this month, prevent me from being about to go back and help with the move, etc., so the majority of this is falling on my brother.  I'm just thankful I was able to go back for his surgery so we could realize what was going on with my dad.  My brother lives 90 miles from him and only sees him for an hour or two every other week.  And during that time, dad has seemed pretty good.  It's when you spend 24/7 with him, that you see what's really going on.

Anyway, in between spending a week with my dad and losing two weekends to driving and catching up with my family, I didn't stitch much in July.  And my exercising has all but vanished!  Thanks to Heather at Stitching Lotus for sponsoring the monthly smalls SAL.

Birthday card for my husband and eventual Christmas card 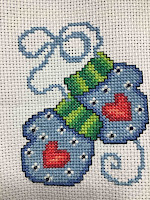 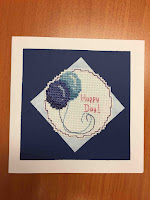 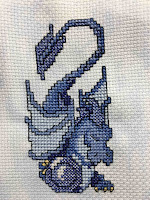 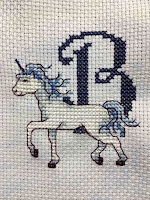 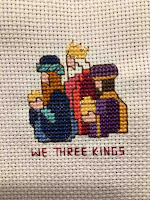 Lots of Christmas in July! 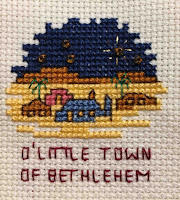 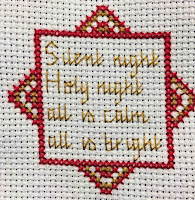 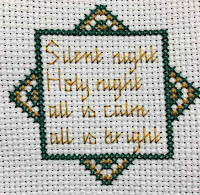 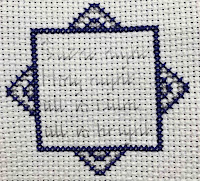 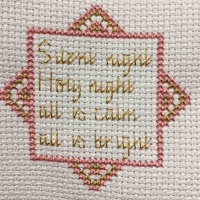 Hope your month went well.
Posted by Michele Stravato at 7:39 AM 1 comment: